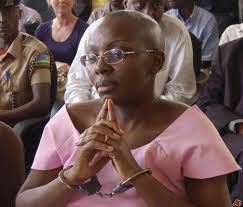 Kigali, 19 October 2012
The High Court today postponed to 30 October 2012, 10:00 for the 4th time the verdict  in the “life sentence” case against political prisoner Madame Victoire Ingabire Umuhoza,  FDU-INKINGI Chair, in maximum prison since 14 October 2010. The court informed the public that before the final ruling there is a need to “fast track the prosecution phrasing of genocide ideology charges and to include the Supreme court refusal of the constitutional review lodged by the defendant”. This new adjournment comes amidst unrelenting interferences of President Paul Kagame and his government which has been shifting goals hoping to psychologically erode the moral of the political prisoner. This is taking the opposition to the saturation point. She was charged with forming an armed group with the aim of destabilising the country, complicity to acts of terrorism, conspiracy against the government by use of war and terrorism, inciting the masses to revolt against the government, genocide ideology and divisionism.
A manhunt against FDU-INKINGI members in Rwanda is still underway.
This intimidation has made the opposition stronger. There is a light at the end of the tunnel, and we will go for it until. Everybody knows that this kangaroo process is just a political masquerade aiming to stifle political competition. This regime knows very well that she is innocent. Rwandans from all the folks know that she is innocent. Many will march until freedom is won. We expected the international community and even friends of Rwanda to intercede on President Paul Kagame in order to make him understand how crucial this moment is for the future of Rwanda.
The regime is celebrating the election of Rwanda to a non permanent rotating UN security council seat, seen as a long held dream. “The vote has been overshadowed by a leaked report from a UN council of experts that Rwanda’s defence minister and army chief of staff were personally directing a campaign by M23, a guerilla movement in the east of the Democratic Republic of Congo” (Damien McElroy, Foreign Affairs Correspondent, The Telegraph 19.10.2012).
FDU-INKINGI believes this is another dysfunction of the United Nations because the  Rwandan leadership has a case to answer regarding the M23 rebellion in the DRC.
FDU-Inkingi
Boniface Twagirimana
Interim Vice president